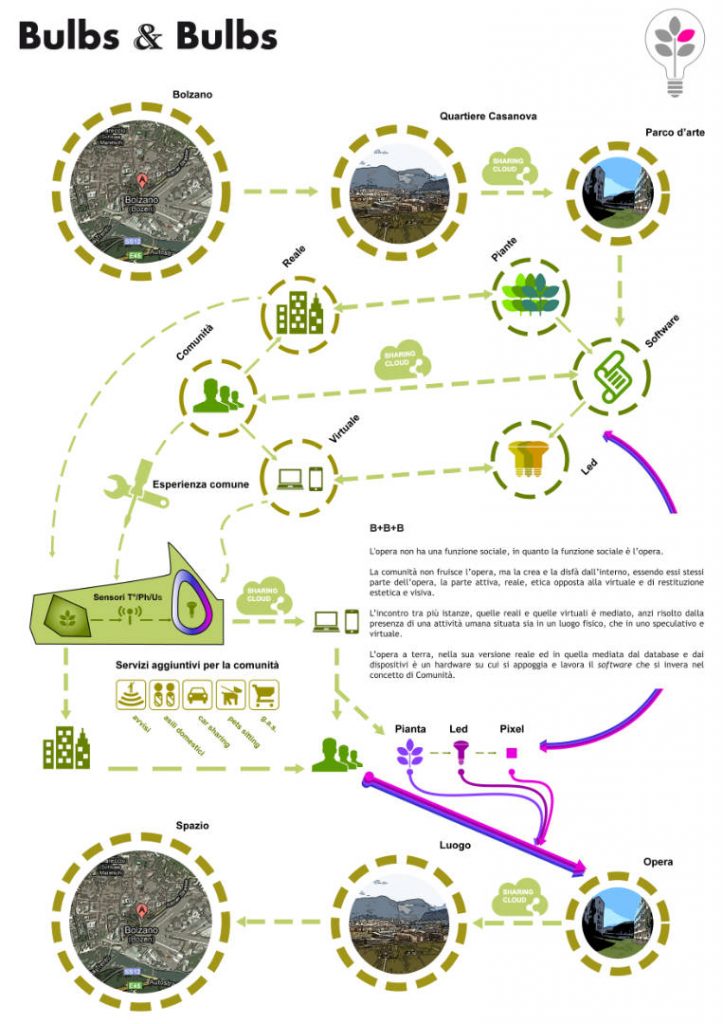 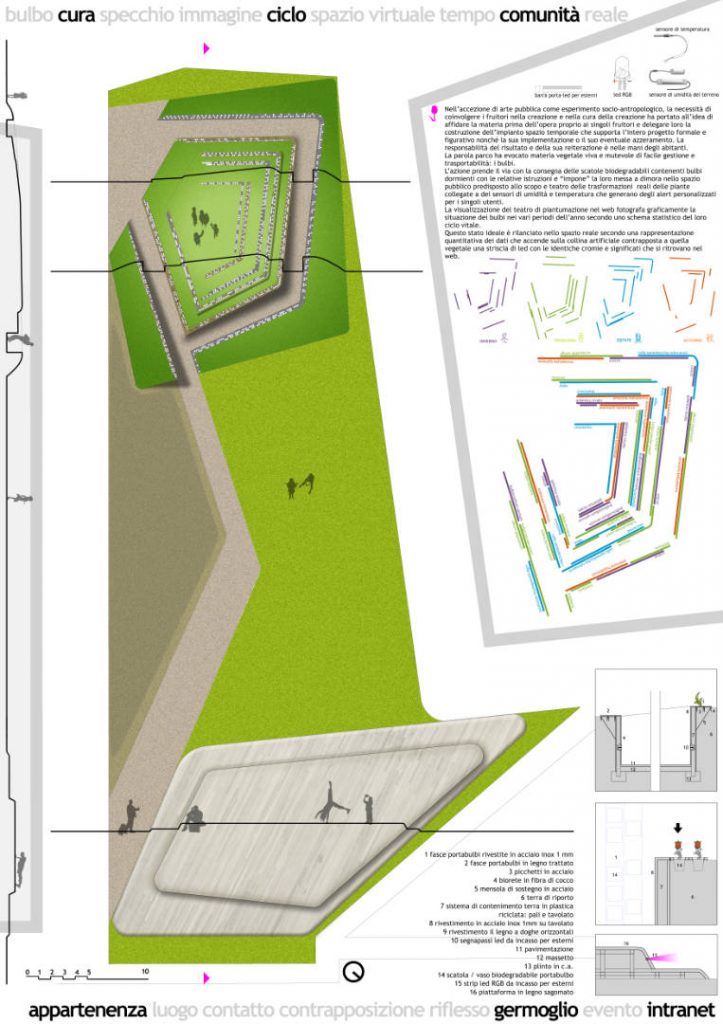 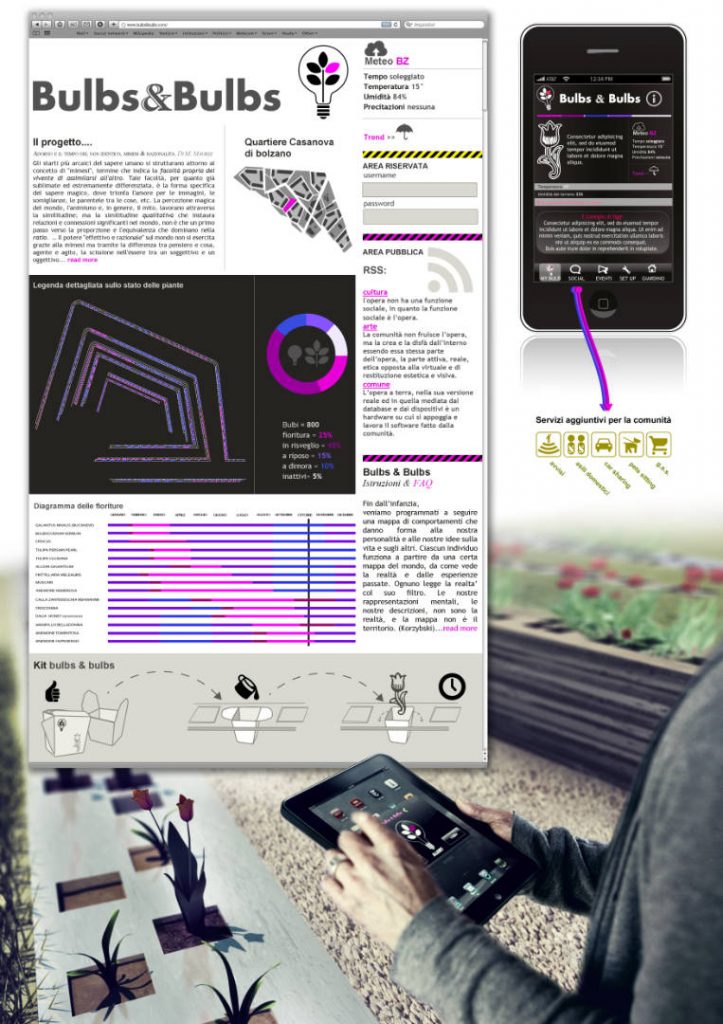 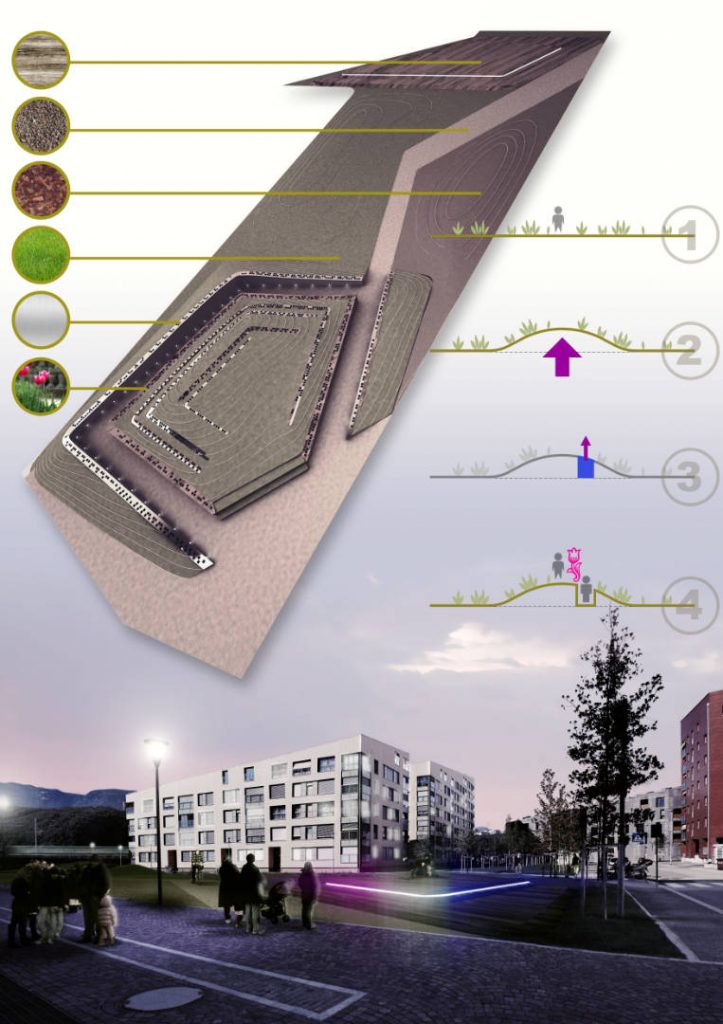 The work of public art can be conceived according to two procedures: the first places a pre-conceived work in an area of action, the second follows a path of negotiation with the inhabitants. In the sense of public art as a socio-anthropological experiment, the need to involve the users in its creation and care has led to the idea of entrusting them with the raw material of the work and delegating to them the construction of the spatial and temporal system that supports the entire formal and figurative project, as well as its implementation or its possible cancellation.

The concept underlying the intervention overturns the idea of the hortus conclusus and addresses, from a formal and substantial point of view, some of the antinomies that run through our daily lives: real vs. virtual.
If in the proposed operation the entire communication and data transfer system belongs to a virtual category, the interventions proposed to the inhabitants of the Casanova complex will be anything but nominal.

The main aim of the project is to create – from an eventual community – a real community of citizens, men and women who share their ethical and social choices around a few significant aesthetic and practical interventions.

The word ‘park’ evoked a live and mutable plant material that is easy to manage and transport: bulbs. The action begins with the delivery of biodegradable boxes, containing dormant bulbs with instructions, and “imposes” their planting in the public space arranged for the purpose and serving as a stage of the plants’ actual transformations, monitored by humidity and temperature sensors that generate customised alerts for individual users.
The web display graphically photographs the situation of the bulbs at various times of the year according to a statistical scheme of their life cycle. This ideal state is relayed in real space by lighting up a strip of LEDs on the artificial hill with the same colours and meanings as those found on the web.

The re-composition we were talking about takes place in this interlock between virtual and real, between represented and perceived, between experienced in first person and shared.

The site will have a private part for bulb keepers in which users can monitor their plants (temperature, light, soil acidity) in relation to optimal parameters, and will have a notification board for notifications and announcements: car sharing, home nurseries, ethical purchasing groups, etc.

The public part will contain information from the administration, as well as cultural, social, sports feeds, etc.
A mobile application in wp touch format will reproduce the website.

The decision to randomise the allocation of bulbs among more than 900 homes, allocating non-homogeneous groups of inhabitants to each type of bulb, will allow them to work in synergy in the same place and time, creating micro-communities.

The real accomplishment of the project lies neither in the care of the plants, nor in the intervention of street furniture, but rather in the fact that more than a thousand users are informed of what’s happening to their neighbours, informed not observed, and that from this sharing – the cloud sharing – may one day come an act of kindness, a nod of further civilisation in this area, in a unique and unrepeatable way.

The effect of involvement can be increased with the collaboration of professional technical schools.
The materials used for the creation of the two hills, vegetal and artificial, are those already widely used in the neighbourhood (steel and wood) in order to accentuate the sense of familiarity with the cyclical work that has been created, but also to ensure the availability and knowledge of use in the area.

The earth of the vegetation hill is supported by geomats. The resulting solid form is inclined southwards and cut by two paths that leave uncovered the material, which defines the inner part: wood and steel are bent along the upper perimeter of the paths to create pre-drilled strips in which the boxes with the bulbs will be placed.

The artificial hill is a two-tiered platform, made of shaped wooden planks. Along the upper elevation the LEDs will be housed, representing the linear transposition of the graphic that appears on the web. The designed space is extremely flexible, suitable for diversified collective uses, from the barter market to summer yoga, and to possible temporary installations of other contemporary art works.

Competition of ideas for an art park in the Casanova district of Bolzano organised by IPES, the Institute for Social Housing of the Autonomous Province of Bolzano

IPES, the Institute for Social Housing of the Autonomous Province of Bolzano