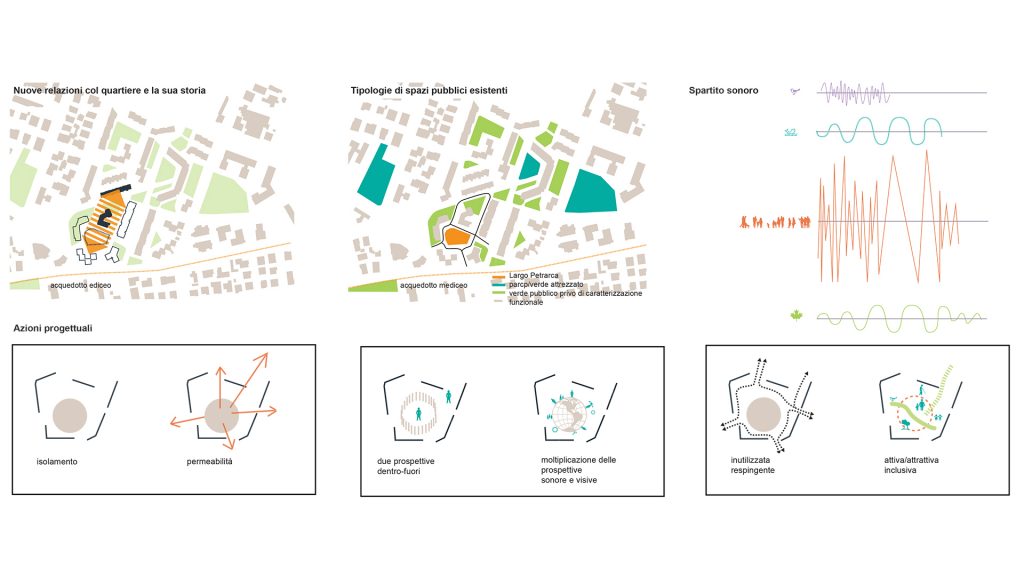 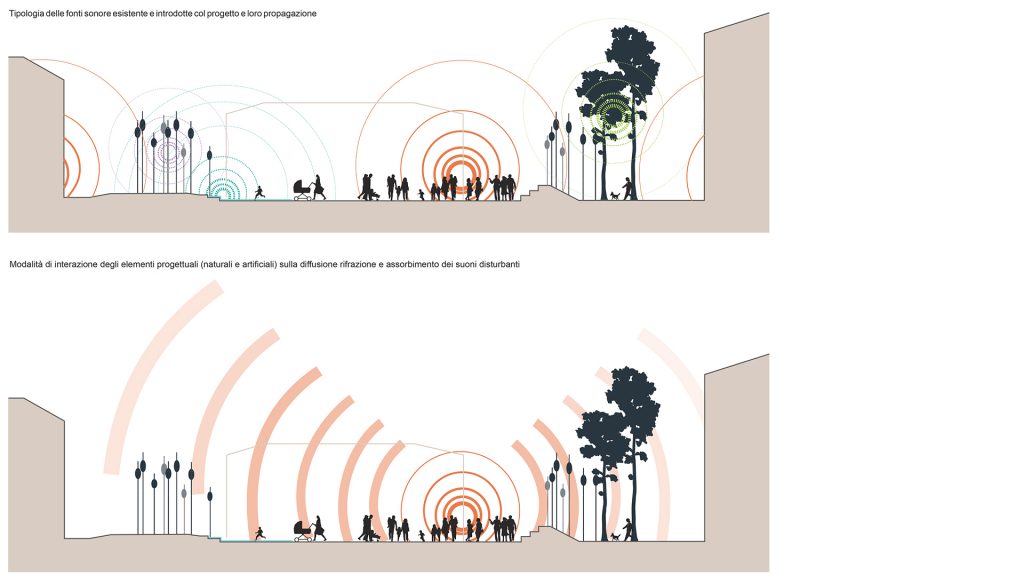 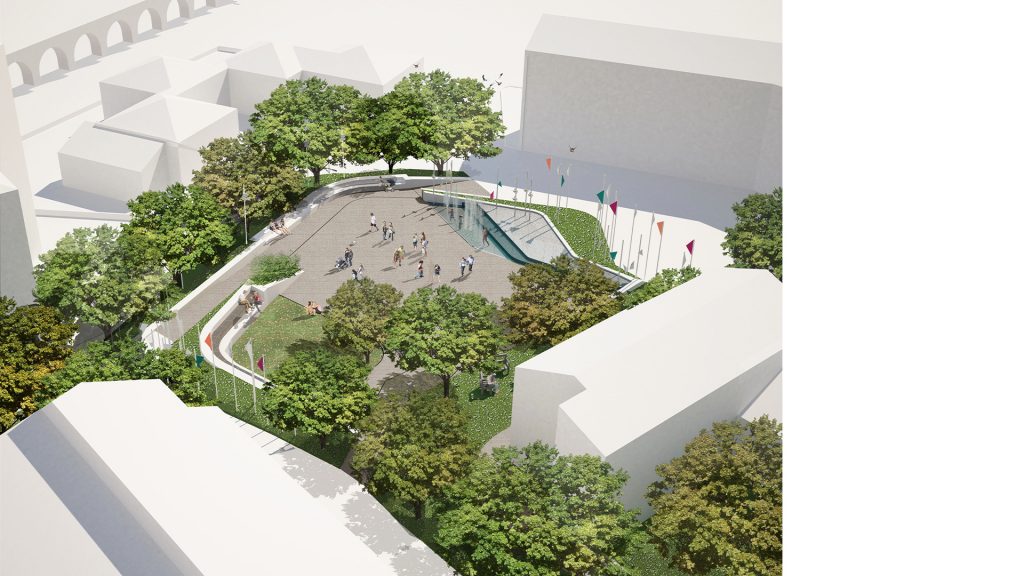 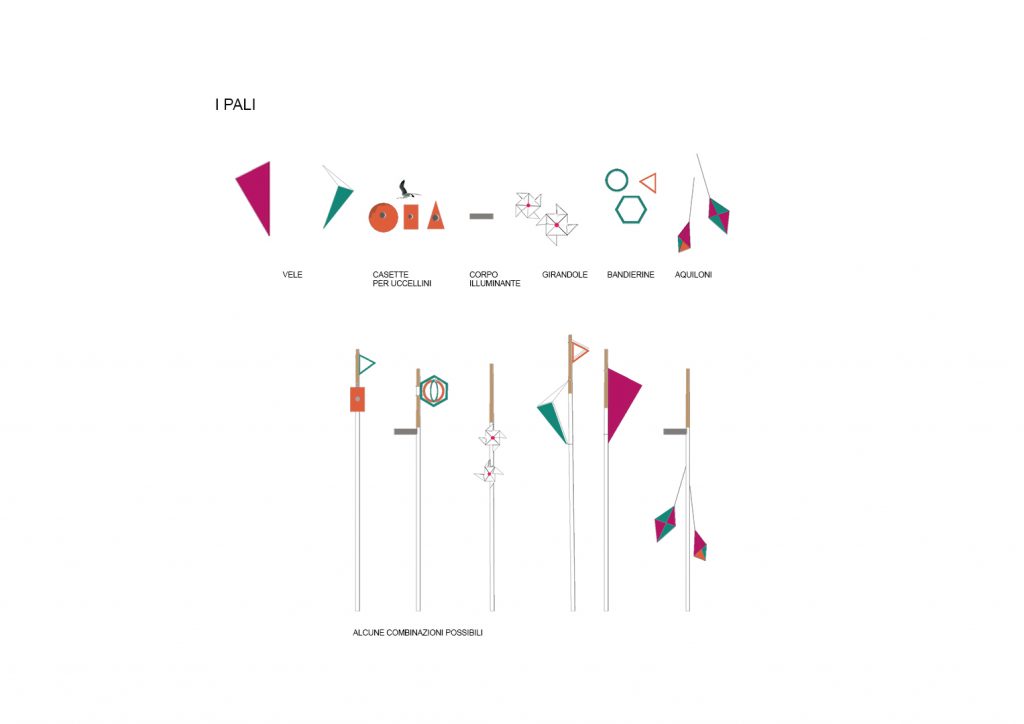 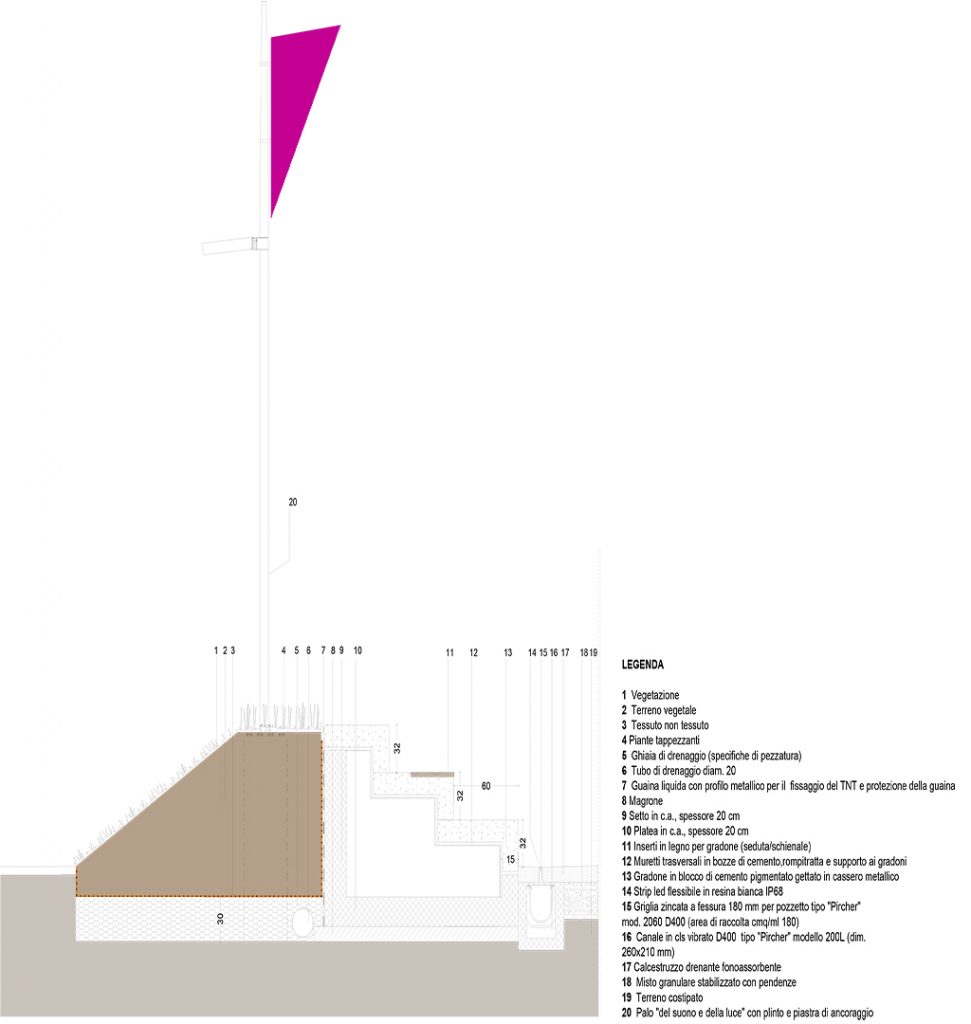 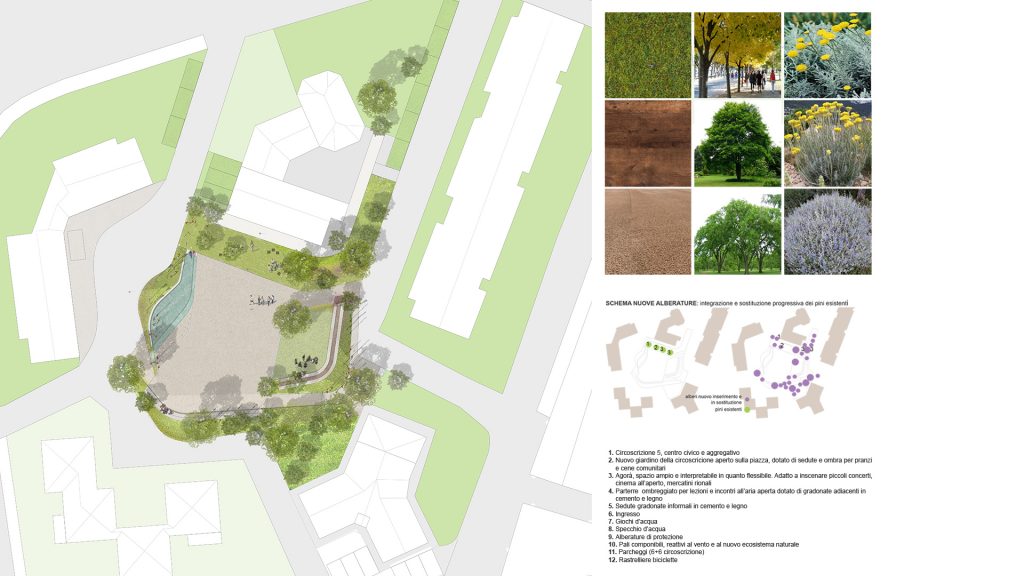 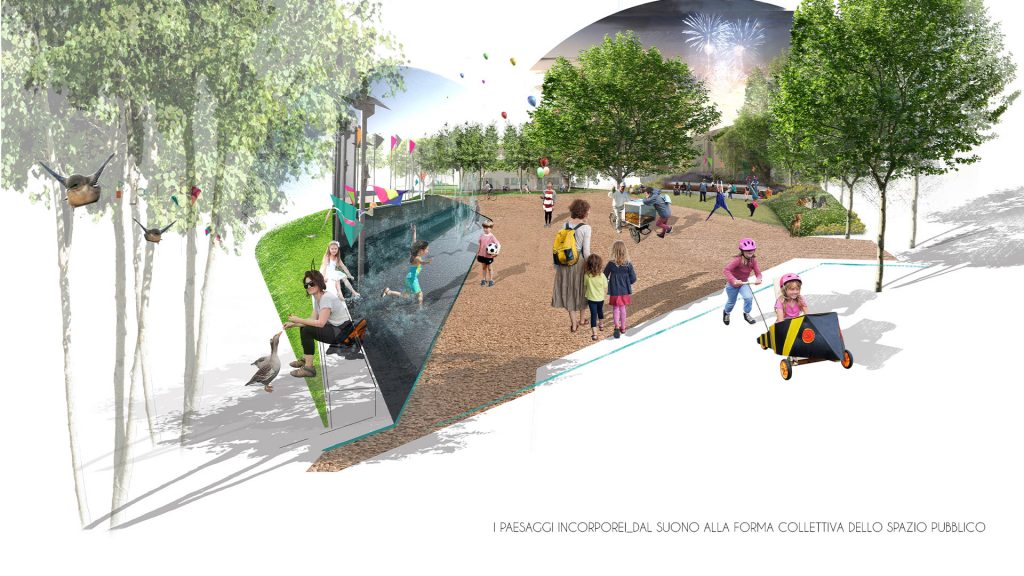 A space that positions itself as central to the functions and use of a neighbourhood, linked to its identity and crucial in its spatial relations and its fruition, becomes an extension of domestic intimacy, the garden/terrace that not everyone has, the scene of everyday life for the people of various ages that meet, listen, read, tell, think, play – in one word: socialize, and appropriate a piece of the city that belongs to them and currently appears abandoned, avoided, unused.

Starting from a need expressed by the tender to control the acoustic aspects of the place, the project develops around the theme of sound as a genuine incorporeal material, just like light and colour. Currently in Largo Petrarca there are particularly reverberant surfaces with focal effects deriving from the inclination of the walls of taller buildings. The prevailing east-west winds channel the city noises – mainly vehicular ones that do not express sound values ​​of particular interest – from the outside. Thus, starting from the acoustic component, the design of the space is not limited to the mere treatment of “noise” in its purely quantitative component; instead, it considers sound in its aesthetic, qualitative component and recovers its perceptive and semantic values. The sound guides the composition of the space, the choice of materials, defining the urban sound form as a real “Soundscape”, characterized by soundmarks and dominant sounds. The new sound space does not lose its peculiarities of public space as it is experienced, but softens its contents by using the playful aspect of sound in a dialectical relationship with the natural elements of water and wind, to the detriment of the pervasiveness of a diffuse and amorphous noise such as vehicular noise in the background. The well-being that public spaces – equipped with green areas and recreational assets – can generate in everyday life is linked not only to their ability to create environmentally evolved and climate-performing environments, but also to their ability to define an acoustic and perceptive “pause” from the city noise. In this way, the design of this urban space developed by selecting the sounds to be left active or emphasized (“positive sounds”), compared to those to be interrupted for a period of time or softened, in order to define a state of pleasure and the need/desire to stop and experience the forms and possibilities of interpretation and use. In the daily city life, the human brain is able to extrapolate some sounds and put others in the background, almost excluding them, for our well-being. The question thus is: what kind of sounds do public spaces tell or have to tell? rather than asking what their quantitative effects are in terms of decibels. Is it possible to create a city sound that is not simply quieter but actually more pleasant? By producing a musical score of sounds that our brain recognizes as pleasant and that are often connected to nature (rustle of leaves in the wind, the sound of slowly flowing water, birds amongst the branches of trees) and by emphasizing their presence within the urban space, sounds recognized as disturbing are overshadowed. If this design of positive sound is then associated with the design of the public space, with methods of reducing the reverberation of the sounds produced inside it and of their containment, through the shape of the space at volume 0 and through its materials, we get closer to the creation of that suspended place that is sought in cities and can characterize a real improvement in terms of well-being and daily experience within it.

SPECIFIC ACTIONS The use of “active” poles, trees and small hills of grass on the edges, allows to mitigate external vehicular noise by creating soft barriers at the entrance to the square and, at the same time, to absorb the indoor “noise” by reducing it.

The spiral positioning of the entrances on the square – shifted if compared to the current accesses of the perimeter streets – avoids the creation of “noise corridors”. The reduction of reverberant surfaces (sound-absorbing ground, land modelling, use of wooden inserts in preformed concrete seats), the use of ludic elements (active and reactive poles exploiting the wind that flows east-west, use of water in motion) and natural ones (rustling of trees and birdsong) allow to introduce new contour sounds and obtain masking effects of the ubiquitous disturbing noises.

In addition to the plant treatment, the topic of water was introduced in order to soften the “heat island” effect, by creating a body of water (with elevation to emphasize the noise) and water features, positioned in the sunniest part, difficult to shade. Furthermore, “water and light lines” consisting of slot channels for rainwater collection, illuminated by LED strips referring to the presence of the old Medici aqueduct, were introduced. The flooring will be made of draining concrete, pigmented in light earthy tones, with high drainage capacity, sound-absorbing and able to soften the “heat island” effect thanks to the light color but mostly to the highly porous structure of the mixture, which reduces heat absorption compared to other conglomerates and restrains the temperatures of sun-exposed paving areas. Furthermore, it is a material that does not require polluting heat laying, resists freezing, is accessible to vehicles and requires low maintenance while keeping its physical-mechanical characteristics unchanged over time. Alongside this material, wood will be used for the seats with inserts corresponding to the backrests, to ensure greater comfort of use and reduce reverberation. Two project lots have been identified: the lot 1 subject of this tender and the lot 2, out of tender, which foresees the arrangement of the area surrounding the lot 1. For the lot 2 we have summarily quantified an intervention amount equal to 260,000 EUR. The parking lots were reorganized (lot 2) and vehicular traffic was moved outside the perimeter while maintaining the access to service and rescue vehicles.

The project introduces new relationships with the neighbourhood, with commercial buildings as well as existing buildings and public spaces; in particular, the building of the barycentric district between the commercial system and the ludic/recreational system, becomes the core of the entire composition and is enhanced while emphasizing its public function. It introduces an equipped green space open to the square and in continuity with it, on the main front of the district and with the commercial buildings on its west side.