Interpreting space, establishing relationships, without giving up contemporaneity and technology. In designing the boundary between the sea, the port infrastructure and the so-called “second coast” – which often is an undefined piece of land with a high degree of fragility and lack of character, the approach was meticulous and punctual, in search of overcoming pre-constituted barriers (car parks, breakwater, outdated previous projects) and spatial and cultural identities never sought over the years. 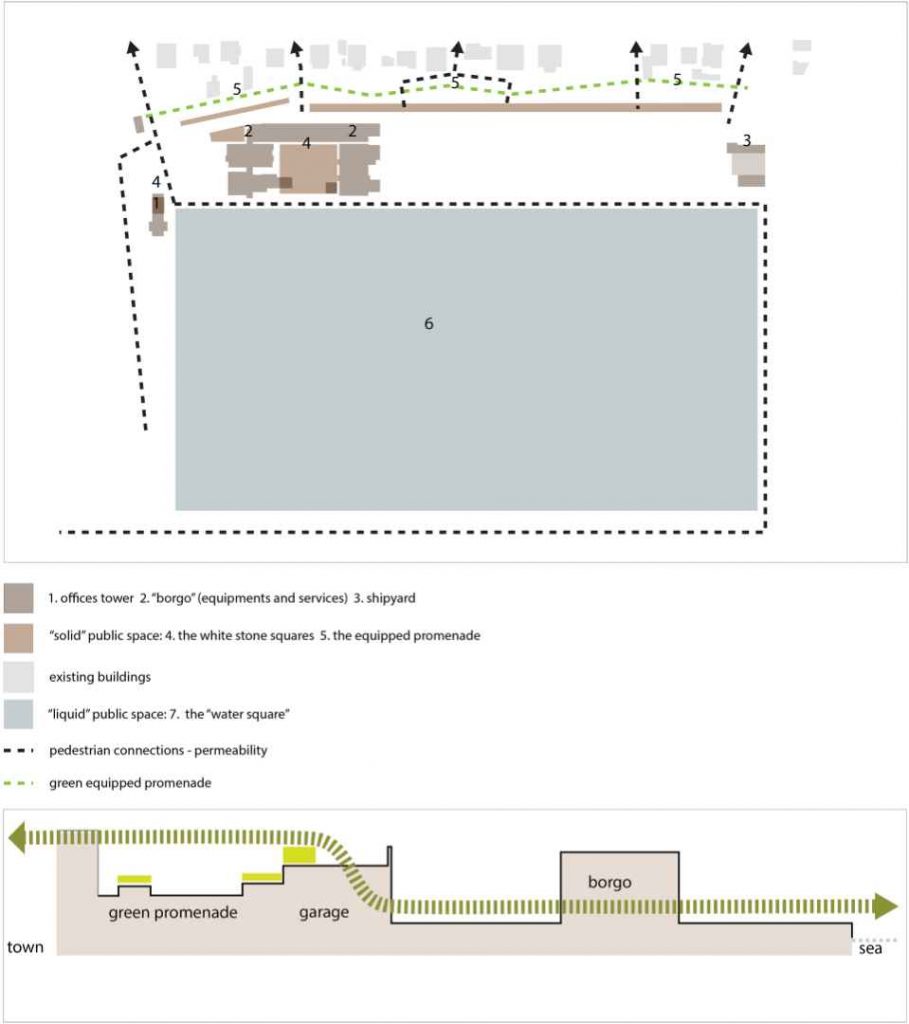 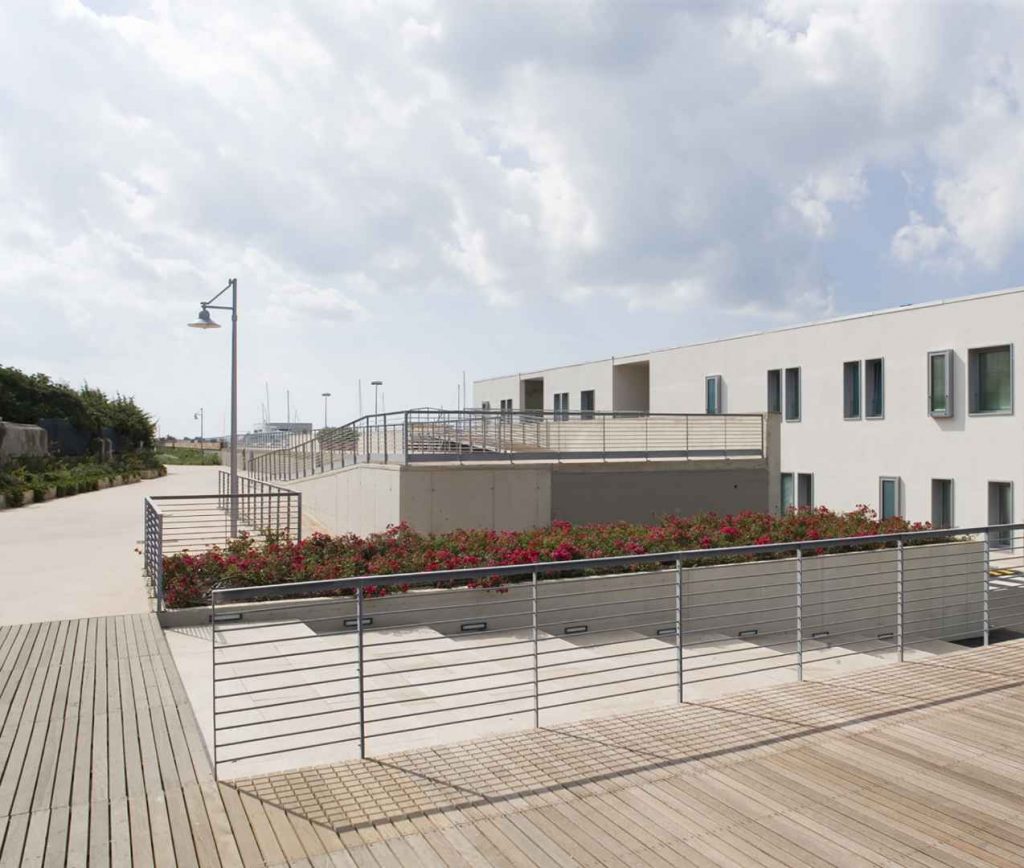 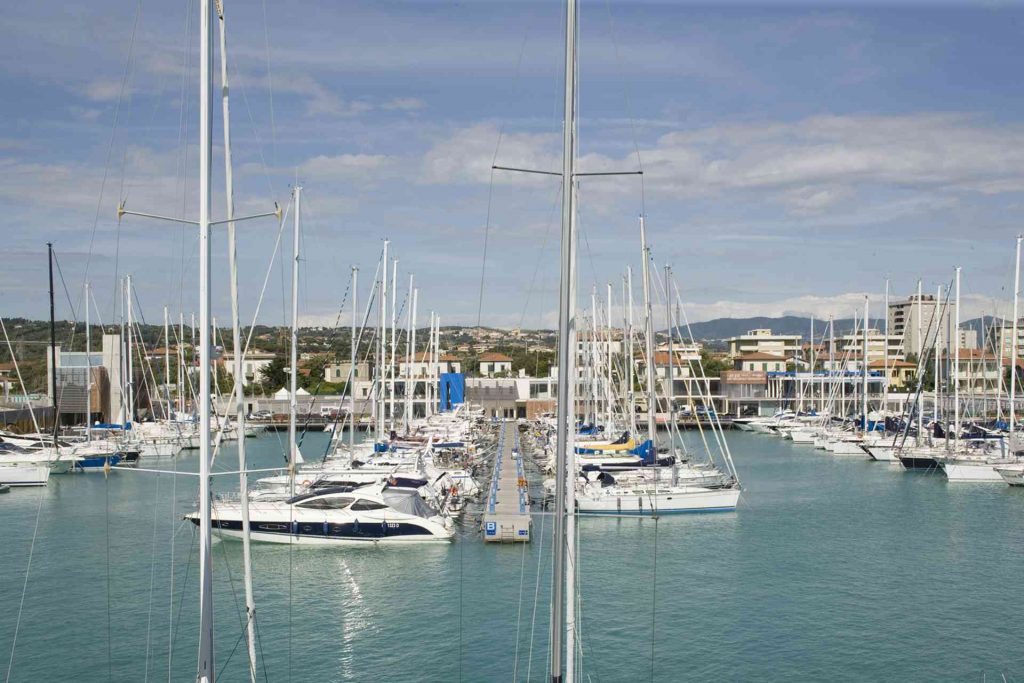 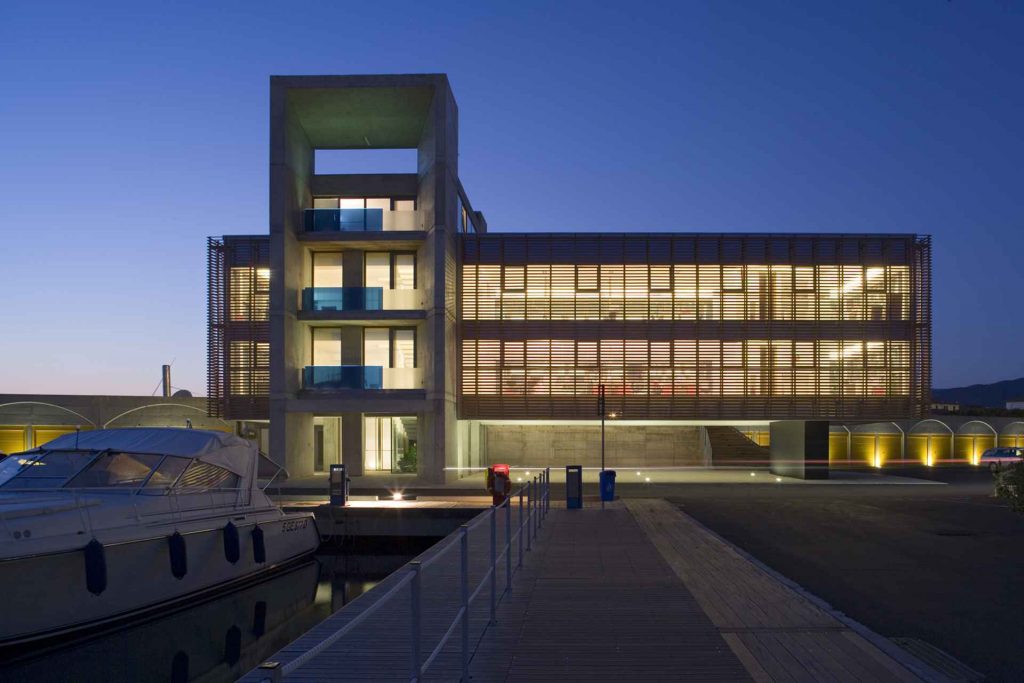 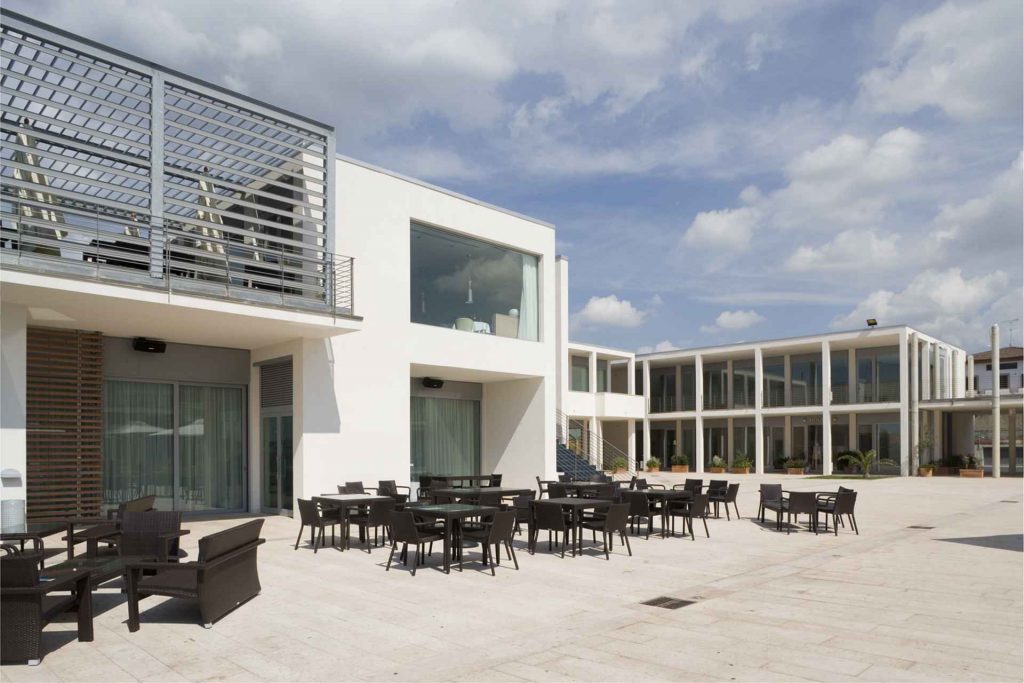 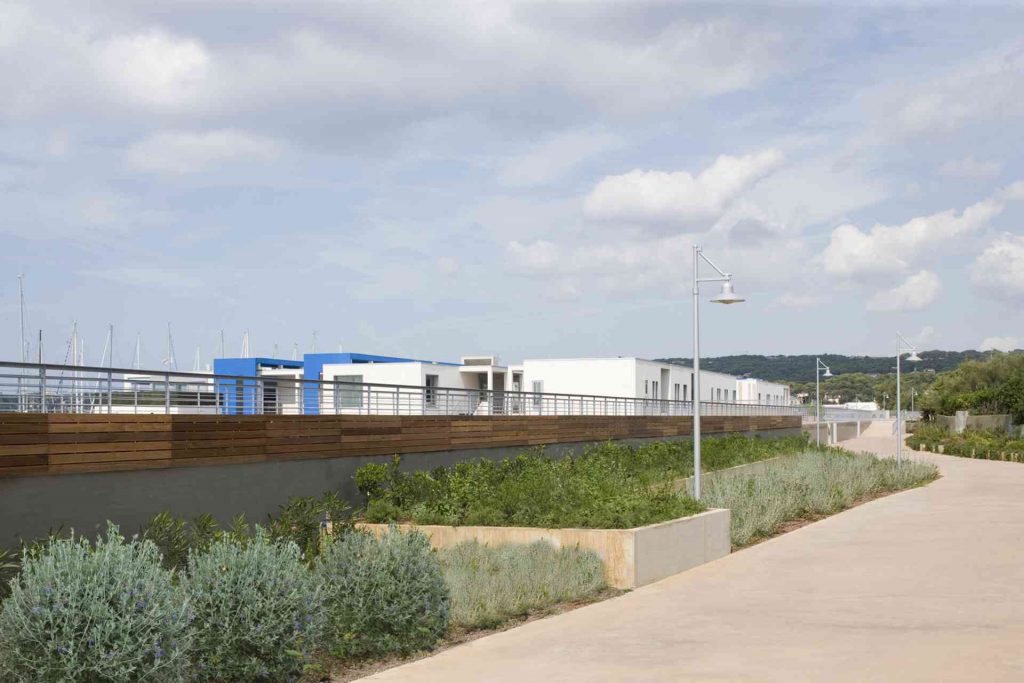 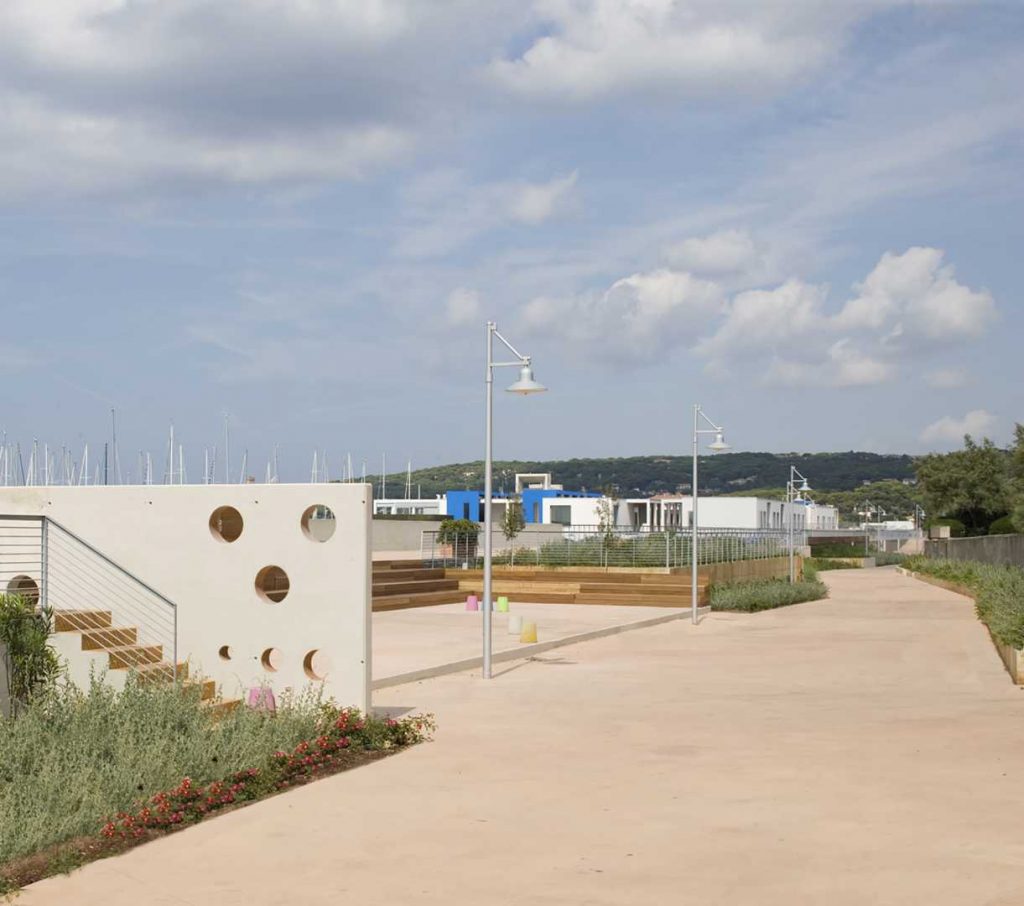 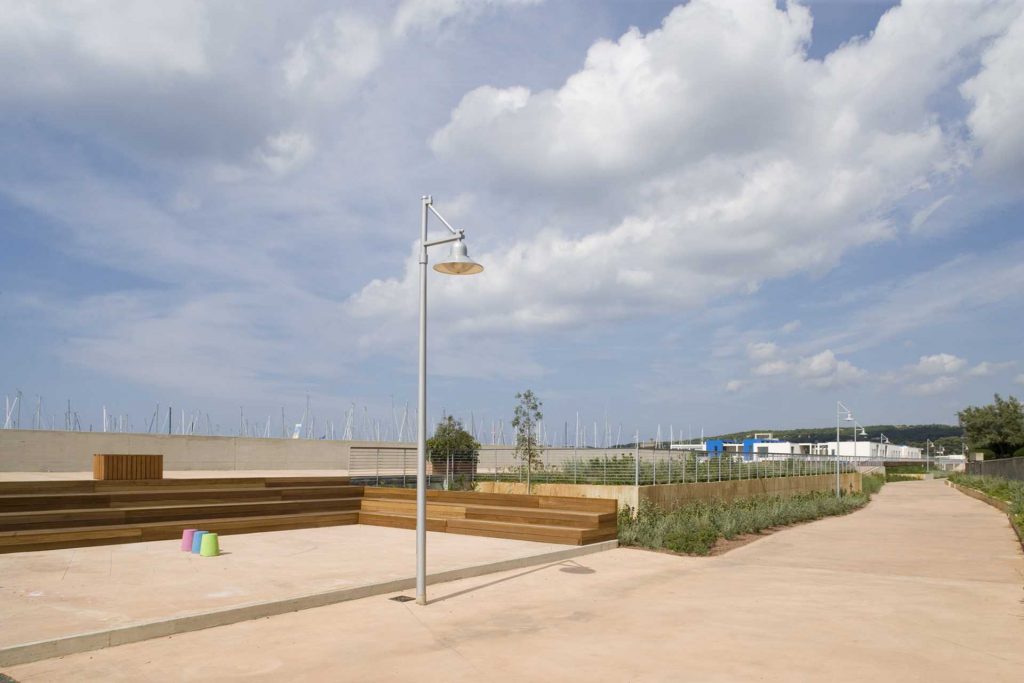 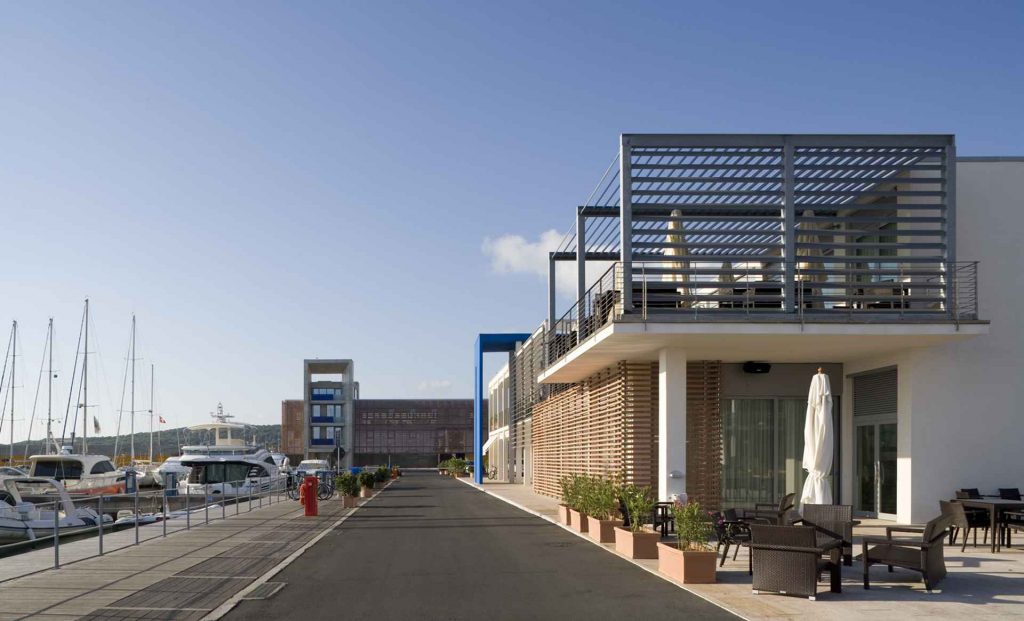 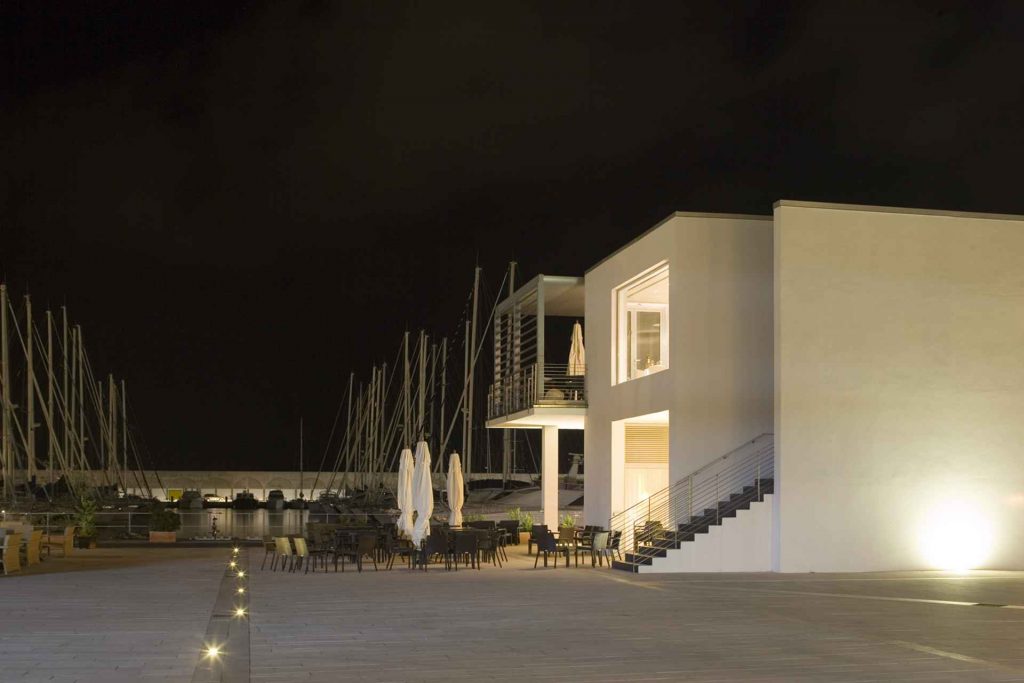 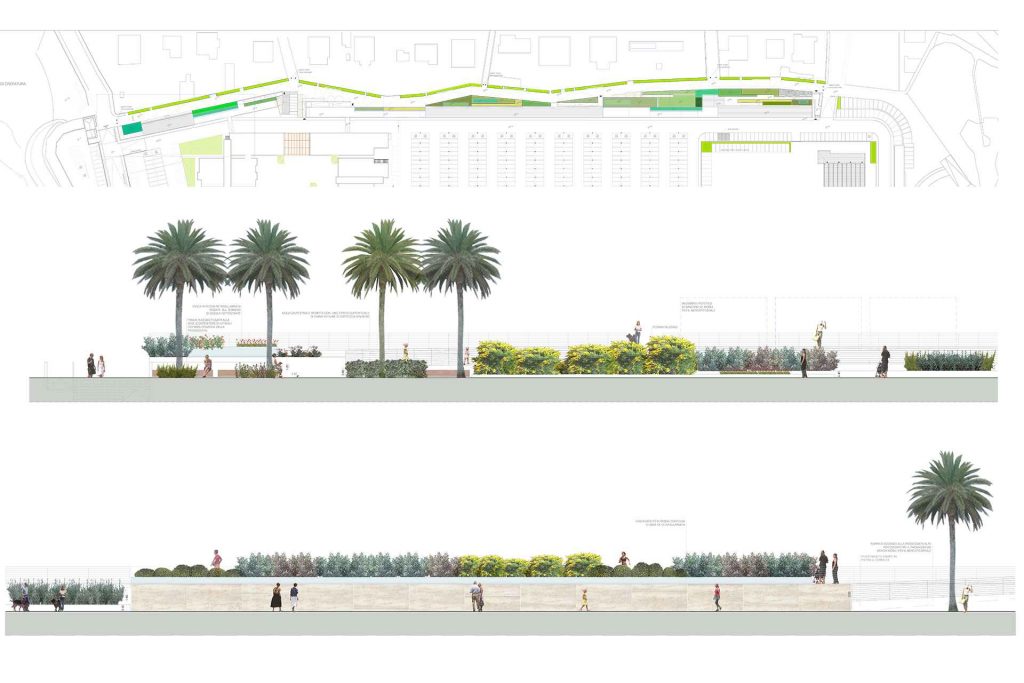 The project includes a 750-metre-long breakwater, six fixed and three mobile wharves for 600 boats, a green promenade, which acts as a mediation between the port area and the city, a large quay on which the shipyard, the service “village” and the management and control building are arranged.

The implemented project replaces an existing and earlier proposal, which proposed to create a sort of medieval village, organised in a “spontaneous” way around a square-court with no relation to the sea; the management and control building must had appeared almost caricatural, given that the Superintendence of Pisa has demanded “a simplification of the architectural lines that would attenuate the characterisation of a coastal watchtower”.

Conceived as a visual finish line of the walk along the quay, the port’s management and control building is defined by the intersection of two parallelepipeds. The vertical body of the tower, made of exposed concrete, seems almost driven into the ground; the front towards the port is configured as a sort of massive portal open to the outside, allowing panoramic views at different levels.

On the other hand, the horizontal volume of the offices is almost suspended by 3,5 metres, supported on one side by the tower and on the other by a concrete plinth, “dematerialised” by black paint. This part of the construction is made with a “light” technique: a modular steel frame, filled with continuous glass surfaces protected externally by a system of horizontal slats, part brick and part metal. This “skin” gives the building an ambivalent character: light yet impenetrable to the eye during the day, dematerialised by light almost as if it were an urban lantern during the evening hours.

Same construction elements (frames and surfaces in coloured concrete, brick and metal sunshades) were used for the buildings of the “borgo”, the space designed for guesthouses and services for guests of the tourist facility. Rejecting the layout of the first project, the volumes are arranged in bands parallel to the sea, staggered to create precise transversal perceptual corridors open towards the quay and animated by vibrant effects of light and shadow. The result is a square open towards the port and the sea that amplifies the aquatic dominance of the place, drawing inwards the blue mirror, dotted with boats. A particular focus was given to the definition of the front, built towards the quay, and articulated by pedestrian porticoes and terraces.

The counterpart to this seafront promenade is the green promenade – an element in which the thrust from the sea to the city stretches out into the longitudinal dimension of the port, and engages individual private overlooks and narrow streets behind it in a close dialogue, in order to restore the leading role to the city.The decision to organise the space on two pedestrian levels with three systems of green vases at varying heights allowed to soften the altimetrical caesura towards the residential area and provide residents with new opportunities to use the port: weekly markets or festivals (thanks to light and water points provision), small collective events and concerts in the wooden auditorium, street games for children and relaxed chats at nightfall, enjoying the Mediterranean scents on low longitudinal seats.