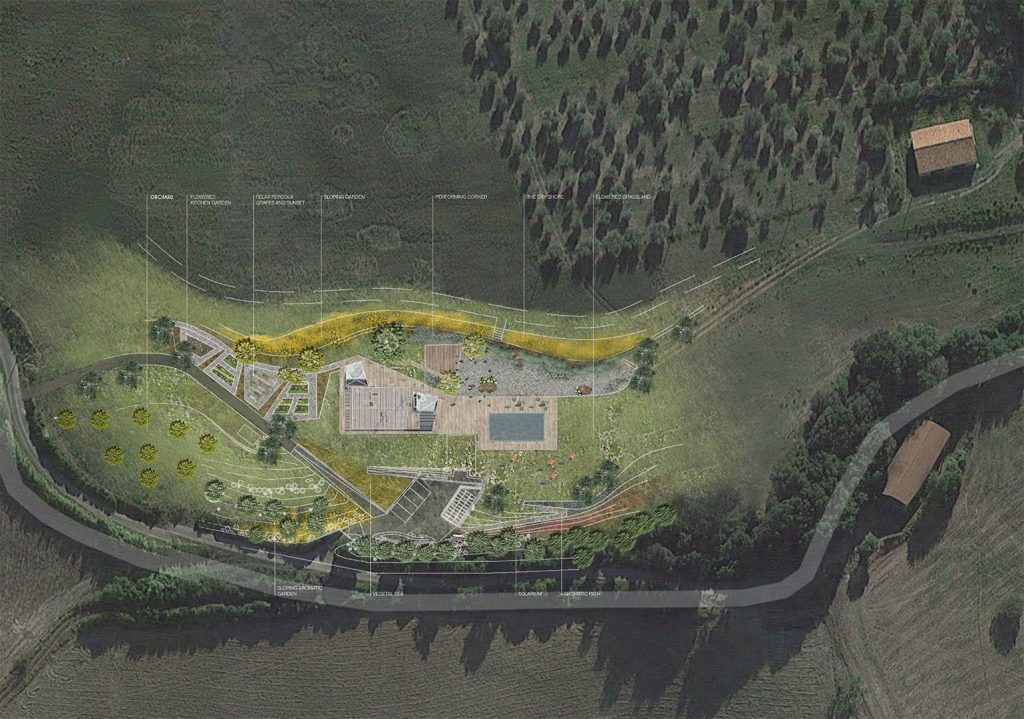 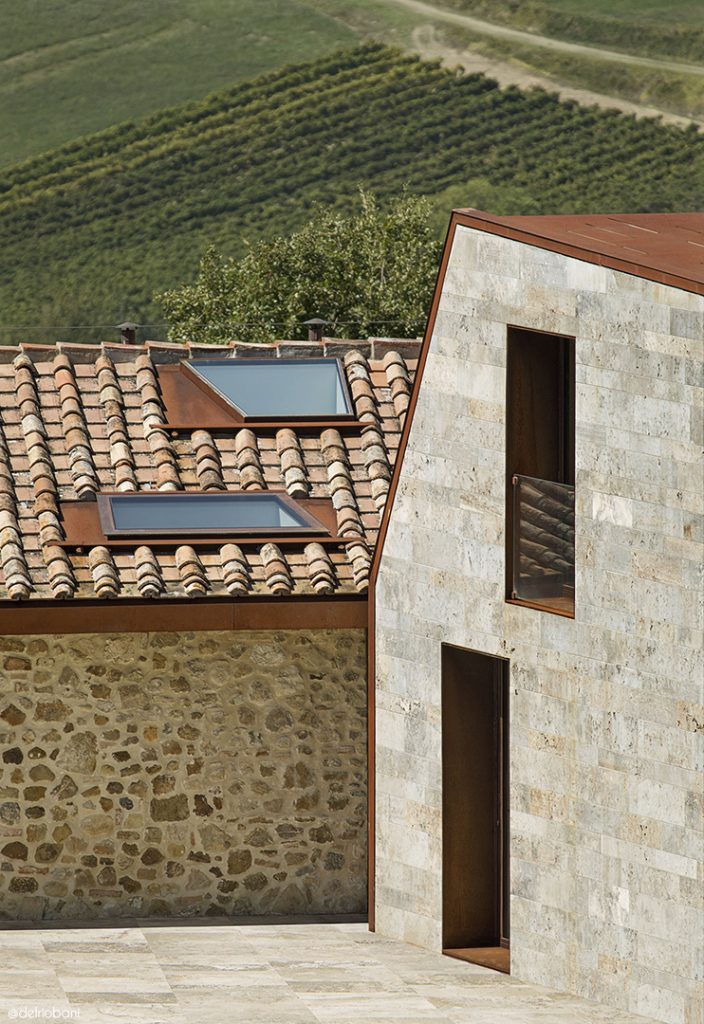 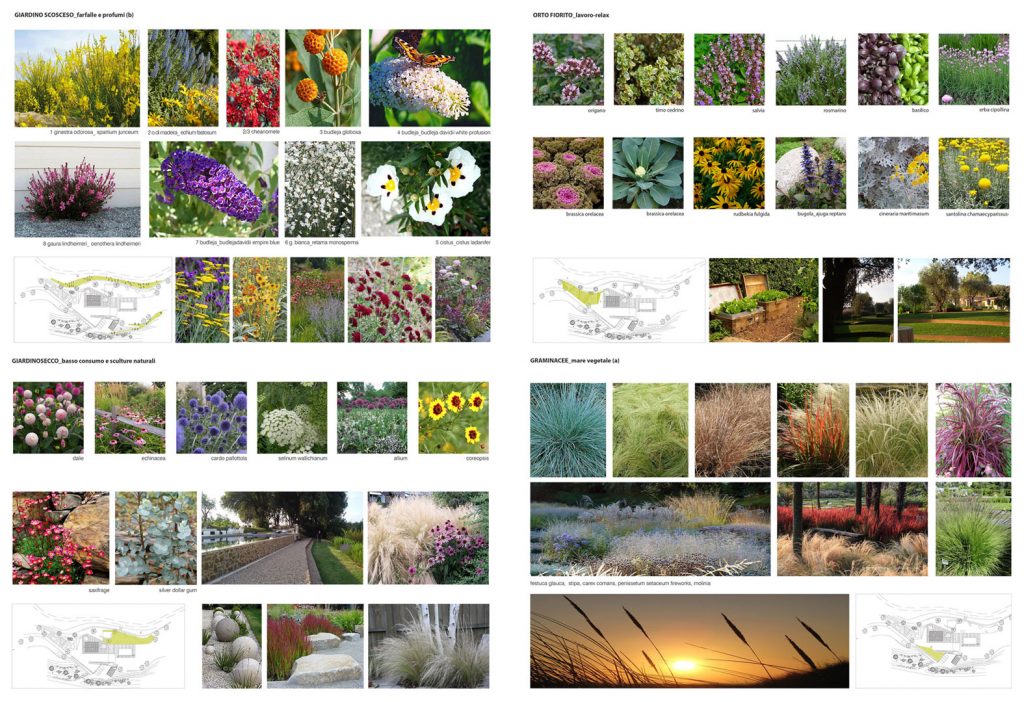 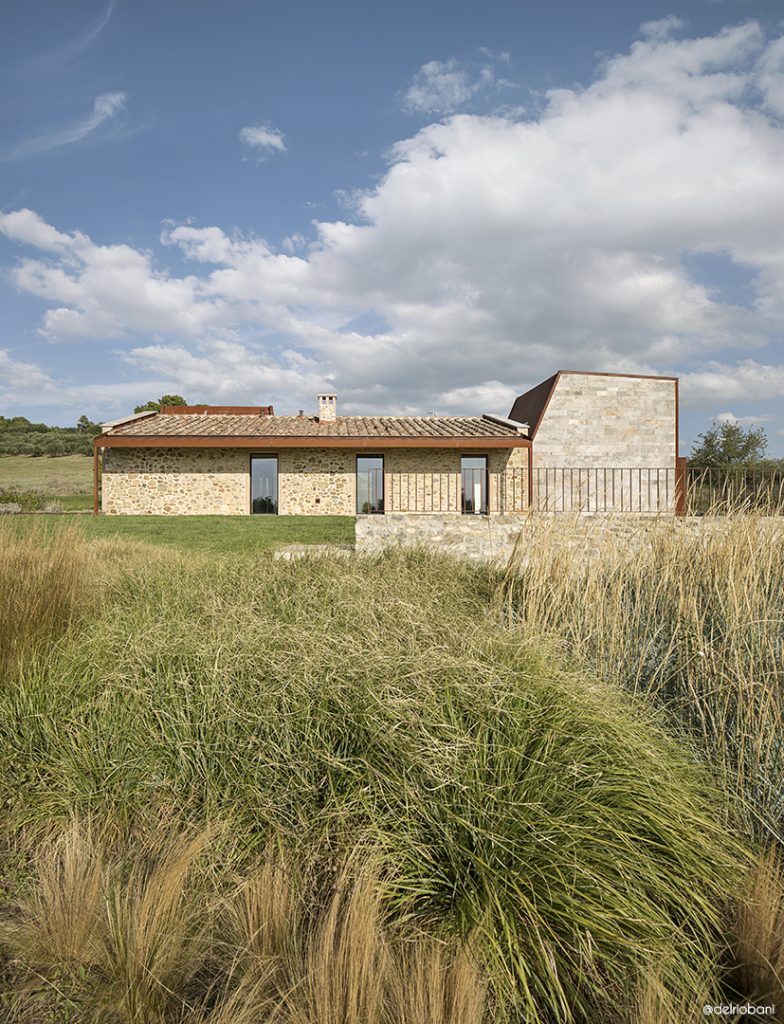 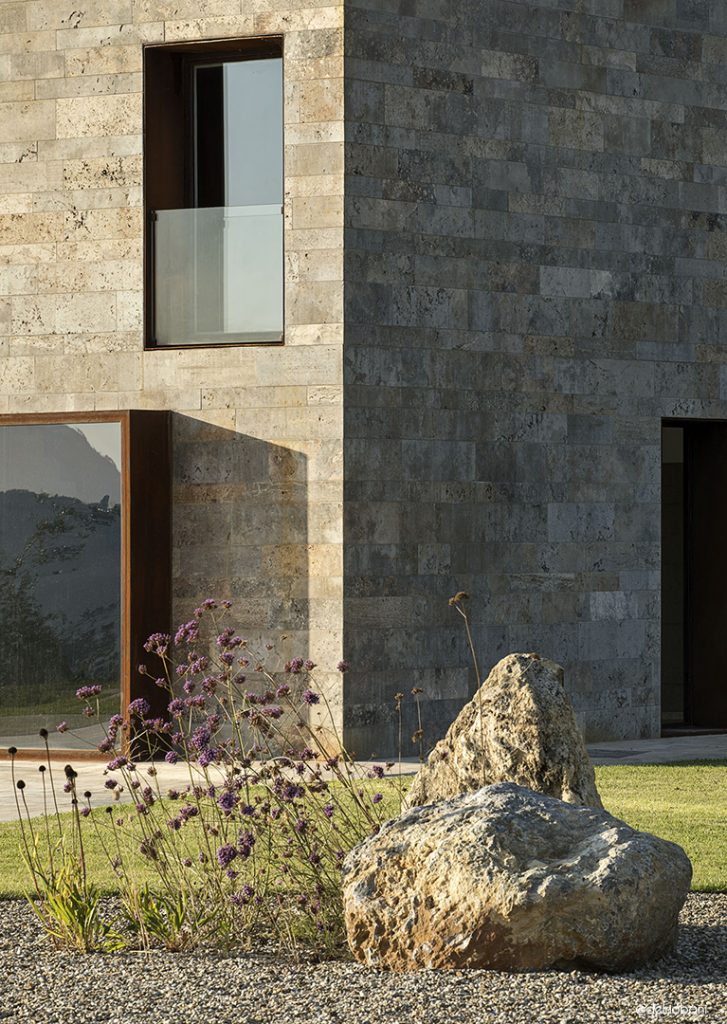 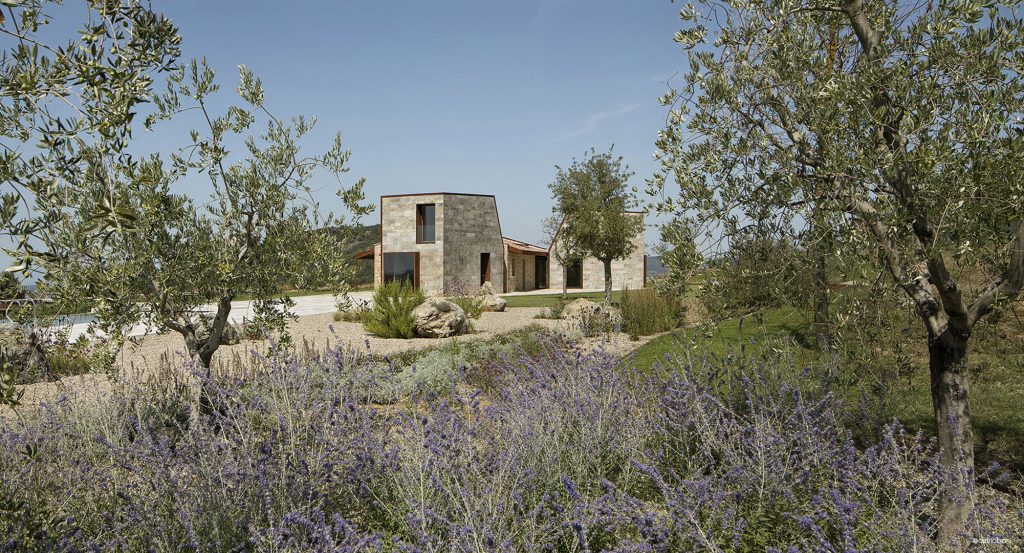 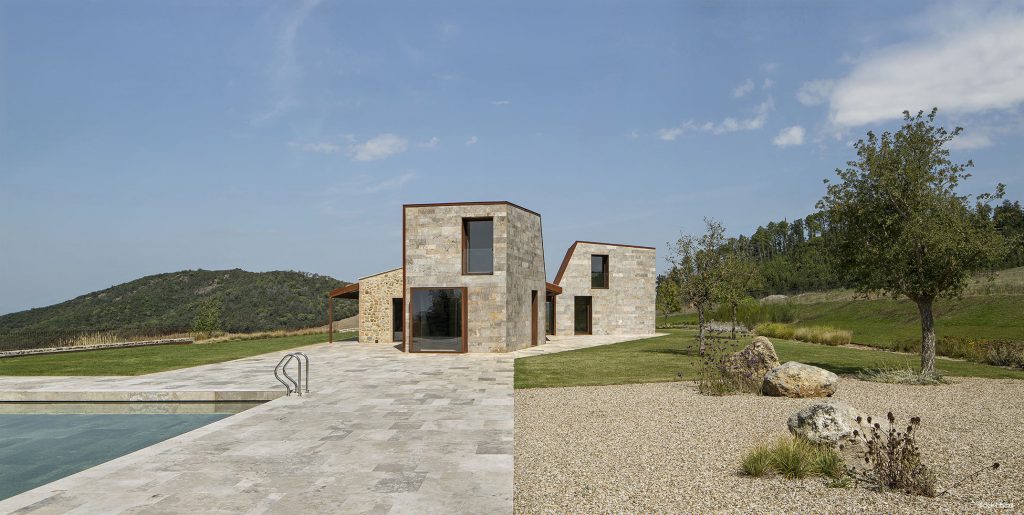 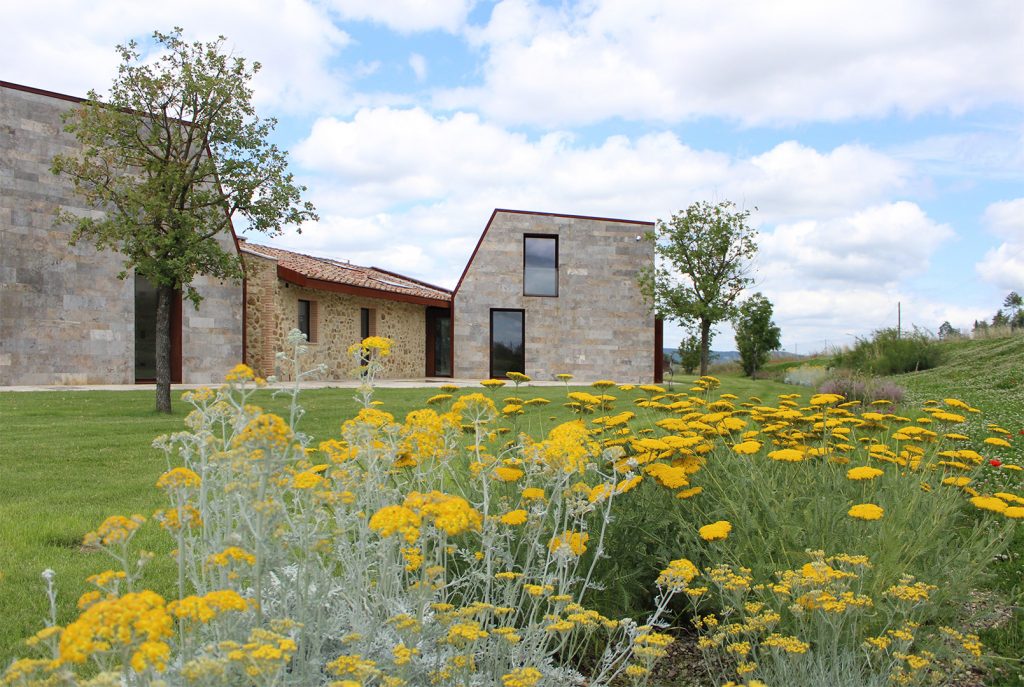 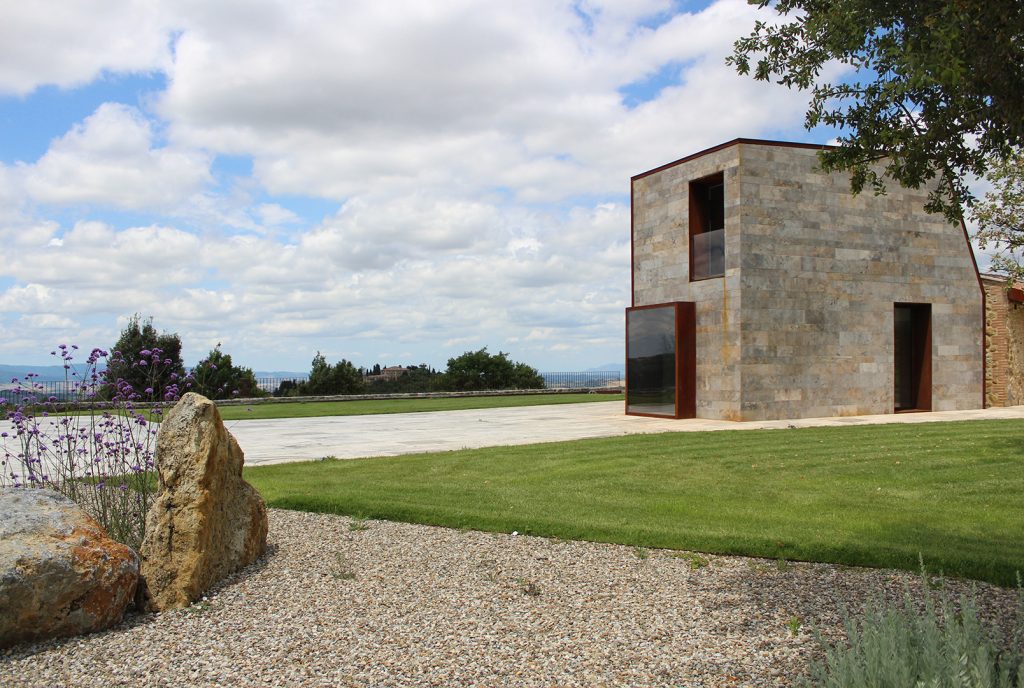 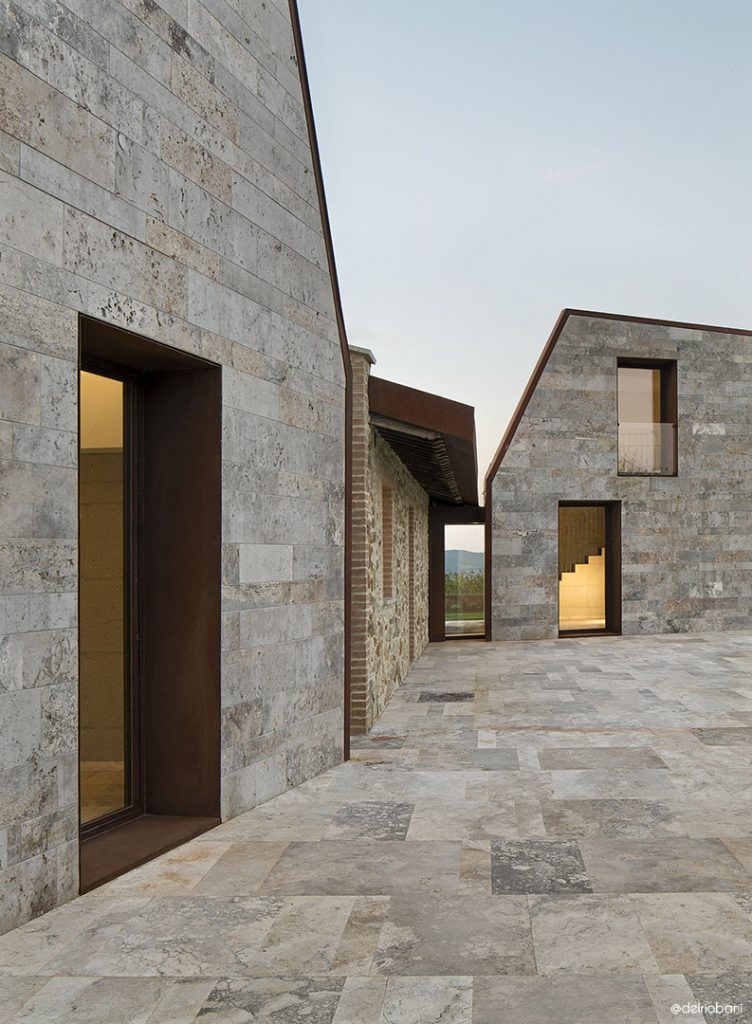 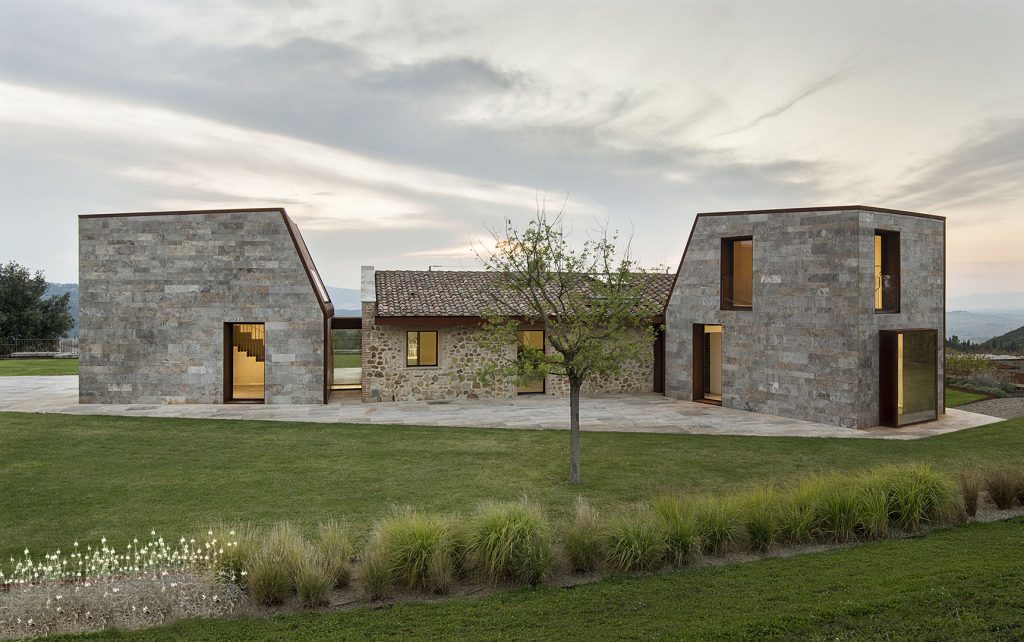 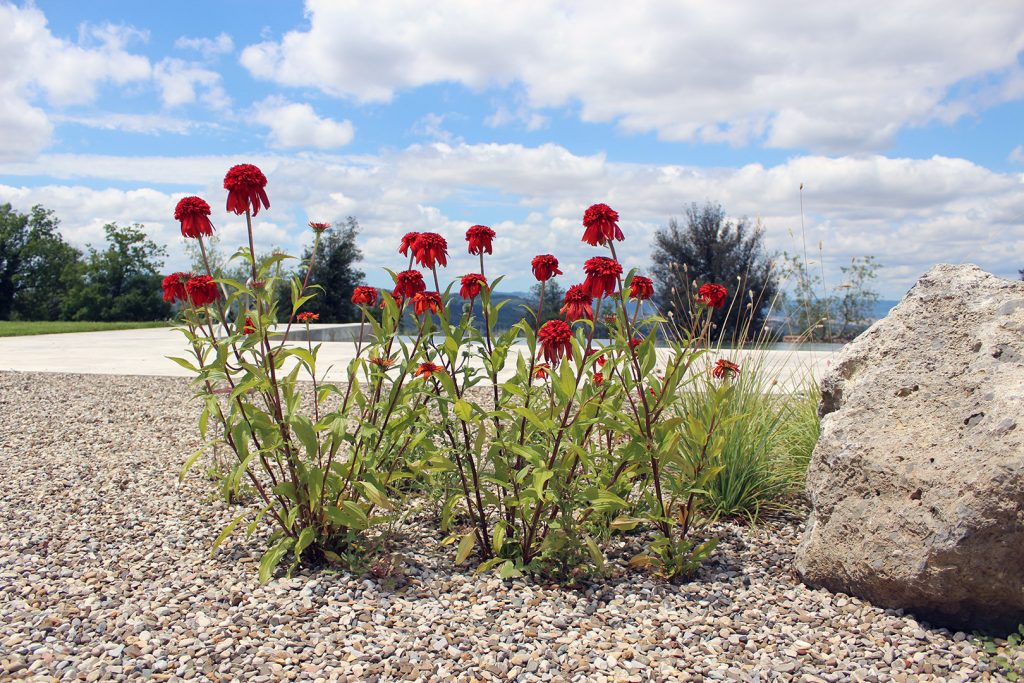 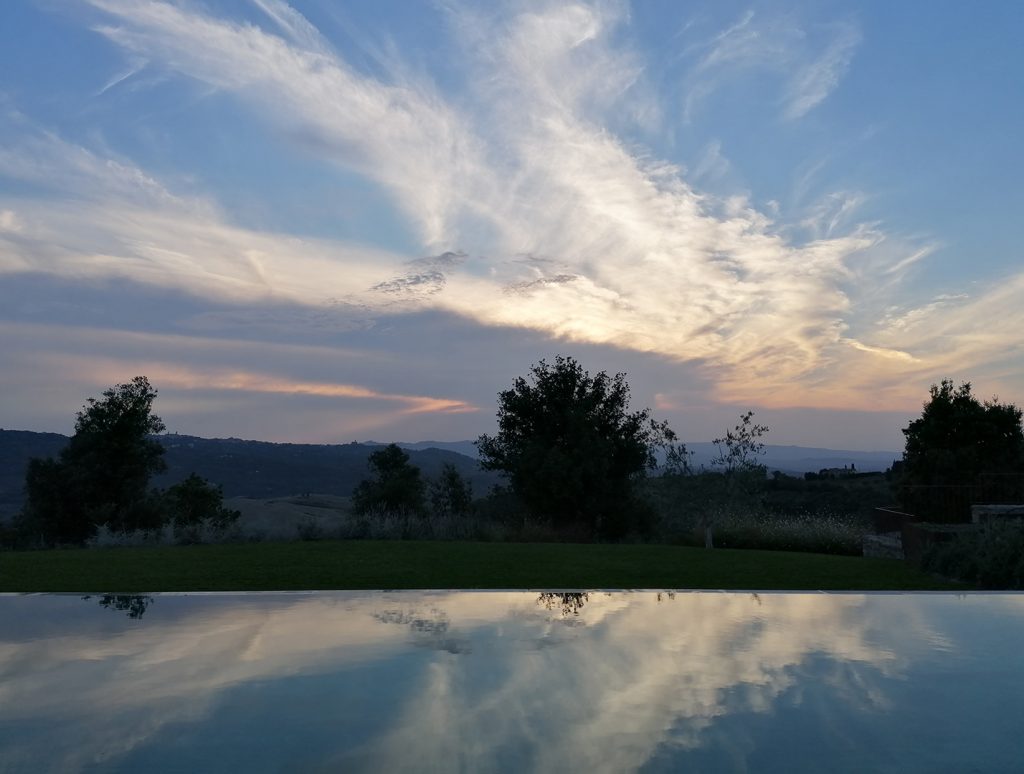 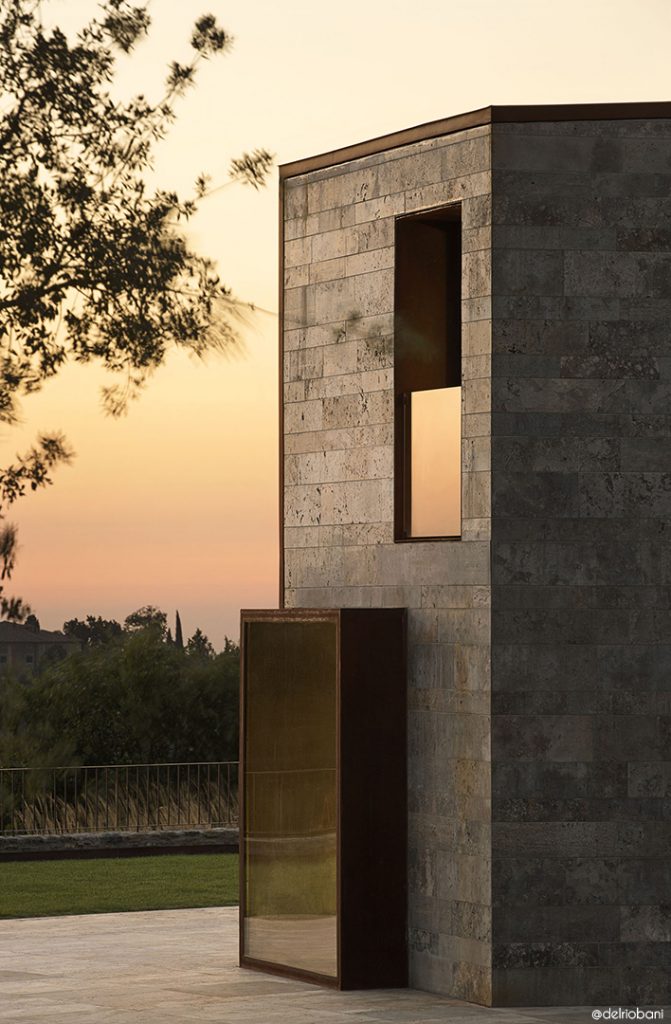 A small compact and stony rural unit, a place suspended between woods, olive trees and the smell of the sea in the distance: this is the scenario of the restoring and expansion intervention for hospitality purposes in a small farm of Volterra, designed by the Studio Milani.

The outcropping rocks loosely spread in the hilly terrain inspired the concept of expansion of the small building as well as the material and technological approach for the creation of the basement flooring.

From one side, in fact, the loose stone becomes a building and joins the existing one with transparent connections in Corten steel and glass, in a neat sculpting of the two newly built prismatic monoliths; from the other side, restoring a use that is typical of these areas helps cover in a play of lights and shadows the height difference between the building and the technical space for parking at a lower level.

The neatness of the lines that define the composition, accompanied by the dramatic shadows generated in this open agricultural space among the woods, brings along a stone carpet that surrounds the three buildings and contains a deep swimming pool open on the horizon.

The metaphysical enlargements of travertine and roofing with internal steel gutter overlook one the swimming pool and the other the field of olive trees through two Corten bow windows fixed into the stone surface and protruding outwards.

A further protagonist of this material story is the park that accompanies the passage among the various recumbent folds within the property, along the north-south axis, and defines a sinuous shore of river pebbles on which nervous lines of metal or travertine aggregate in the opposite direction. Symbiotically connected to each other, the three buildings lie at an intermediate level as if embedded in a cocoon of variable size, consistency and colors.

The shore of pebbles and herbaceous plants that extend into a beach disseminated with large rounded rocks, at the side of the pool, comes alive from the end of winter to the end of summer with colors that vary in shades longitudinally and of medium height. In addition to the varying blooms, the leaves are also varying their shades of greens and greys.

In this evocative margin of disappeared water and river erosion, some shrub insertions of Broom and Buddlea respectively highlight the perspective backdrop of the largest room in the structure and the Corten staircase, which overcomes the difference in height between the house and the overlying field of olive trees. On the opposite side, the line of vegetation is interrupted by the retaining wall that holds the greatest difference in height between the house and the parking lot, and follows the two pedestrian paths that start from there and conduct towards the swimming pool on one side and the stretch of grass on the other.

The stretch of grass, evoking the presence of the sea that you can feel in the air – you almost expect to see it on the horizon, fluctuates seasonally and is visible from the living room of the residence, the stage for the natural backdrop towards the coast, as far as the eye can see.

On the opposite side along the second path that runs past the large retaining wall in stone, muffled masses of Russian sage and Gaura define the solarium and connect it to the secondary gate. Each inserted plant element will collaborate with the neighboring ones in a progression of lushness and sculpturesque withering – a continuous movement of disappearance and flowering, just like water disappears in the underground and resurfaces in a source a little further, or like looming clouds pass rapidly and then evaporate in a few moments.

The overall atmosphere is thus characterized by a chromatic mixture typical of the Volterra area where the inert material varies from the grey tones of outcropping rocks to the more earthy ones of the travertine and fields, while the intense green of the woods and the grey-green of the olive trees are dotted with shades of yellow or violet and white.